Dacorum’s Den is a small business grant scheme in Hertfordshire 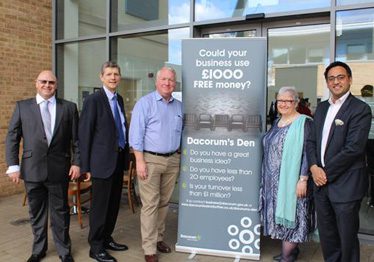 Abodebed has become actively involved in an amazing grant scheme for local SMEs, Dacorum’s Den. The scheme will  work in a similar way to the TV programme Dragon’s Den, where small business owners will pitch to a panel of successful entrepreneurs and business people in the hope of being awarded a £1,000 grant. For a small business or start-up, this can make a massive difference.

Dacorum Look No Further has run Dacorum’s Den annually for the past four years and given a total of £40,000 in grants which have lead to the creation of an incredible 27 jobs.

Our MD, Martin Fieldman, decided that Abodebed should become a major sponsor of Dacorum’s Den and have a place on the judging panel for two main reasons. “The first is that I genuinely believe Hemel Hempstead is a great good place to do business in. I’ve had a very good experience and success running my serviced apartments in the town and I’m very happy to have this opportunity to give something back.”

The second reason is because of the opportunities being a sponsor and a judge will afford Abodebed. “Being a judge will give me a better profile at the same time as giving me the chance  to network with the larger companies I might not normally come into contact with – a type of ‘super networking’ if you like!”

On the judging day of Dacorum’s Den, the ten short-listed candidates will have the opportunity to present their pitch to the judges to try and win at least £1,000 of the £10,000 on offer. It’s by no means certain that a business will receive a grant – the judges are looking for fully formed plans for the money which will positively benefit the company and which simply wouldn’t be able to be realised without it. If the judges feel they don’t want to give a grant to a company, they can redistribute the rest to those they feel would benefit more from it.

Unlike Dragon’s Den, it’s not obligatory for any judge to offer to mentor one of the businesses, but offers have been made in the past. After the judging, all the entries to Dacorum’s Den will be forwarded to all the judges in case they spot potential for mentoring or new partnerships.

Dacorum’s Den has been organised by Dacorum Borough Council as part of its initiative to support local business and is very appreciative of our commitment to the scheme:

“Dacorum Borough Council are thrilled to have Martin Fieldman, CEO of Abodebed and Continental, as a sponsor and judge for this year’s Dacorum’s Den. Martin continues to show his commitment to Dacorum and its business community; he has made it clear that giving back is one of his top priorities. Martin is not only involved in supporting businesses through Dacorum’s Den, but he is also the Dacorum Tourism Partnership Chairman and sits on the board of the Hemel Hempstead Business Ambassadors.” Councillor Graham Sutton, Portfolio Holder for Planning and Regeneration

The deadline to apply for a grant via Dacorum’s Den is midnight on Sunday 5 June. Good luck!